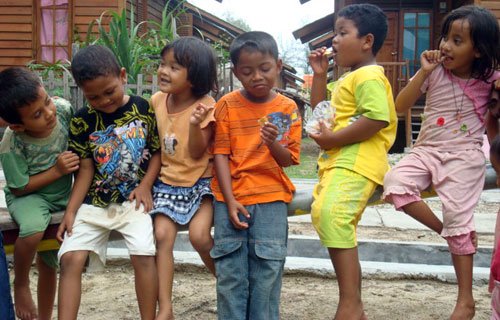 On December 26, 2004 the coasts of 12 countries adjoining the Indian Ocean were hit by a gigantic Tsunami. The Indonesian province of Aceh suffered the highest losses of human life, 160.000 people died, 500.000 lost their homes.

Trauma Aid in this situation embarked onto a program whereby local psychologists were trained in Psychotraumatology so as to enable them to immediately treat people who had suffered from the natural disaster and the earlier civil war.
The program goal was to build up a psychosocial service to treat traumatized children and women , to create a training system for the treatment of people suffering from PTSD and to train local care takers as mental health assistants in the camps to enable them to recognize traumatic stress symptoms. The local holder of this program was the Indonesian national voluntary association of psychologists, Himpsi Jaya. The program was supported by tdh Germany and the German Ministry for Economic Cooperation (BMZ).

The project started in 2007 and lasted until 2010. 50 psychologists were fully trained in trauma therapy and EMDR, 8 of them went on to become supervisors and/or trainers. Moreover 90 local mental health assistants were trained. Therapists treated a total of 3228 persons, about 1500 of whom were children.